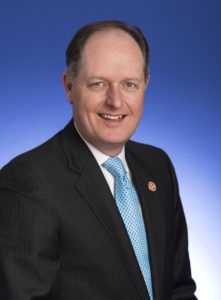 Jack Johnson grew up in a small town in Texas but has proudly called middle Tennessee “home” since graduating from Texas State University with a degree in education.

Jack and his wife Deanna, the Circuit Court Judge for the 21st Judicial District, are raising their three children in Franklin, where they attend Grace Chapel Church.  Jack and Deanna met over 20 years ago at a Young Republican function, sharing the same conservative values and the same dream of a future filled with faith and family.

First elected to the Tennessee State Senate in 2006, Jack was proud that the first vote he cast in the Senate was for the first Republican Lieutenant Governor in 140 years.  In 2008, after only two years in the Senate, he was appointed as Chairman of the Government Operations Committee and only a year later he was named Chairman of the Commerce and Labor Committee.  He served as the Commerce Committee Chairman until December of 2018 when he was elected by his Republican colleagues as the Senate Majority Leader.

Jack Johnson has over 20 years of hands-on experience in the financial industry, beginning his career with Third National Bank (now SunTrust) as well as working in the asset management division of Pinnacle Financial Partners.  In late 2015, Jack began work for an internet start-up company based in Brentwood called Takl.  Billed as the “Uber for odd jobs,” Takl is an on-demand mobile platform that connects self-employed providers with users who need chores and small jobs completed.  The app launched first in Nashville in the summer of 2016 and will soon be available to consumers across the entire country.  Jack serves at the Vice President of Public Affairs for the company.

Senator Johnson proudly represents the 23rd District which includes all of Williamson County.  When the day’s work is done, Jack enjoys spending time with his family, playing guitar, and piloting private aircraft.